Charging an electric vehicle soon may get a lot easier—if you’re in a garage equipped with Volkswagen Group’s “mobile charging robot.”

The futuristic droid-like bot, which was shown in concept form late last year and has since moved onto the prototyping phase, autonomously transports itself—with an energy storage unit in tow—to wherever a vehicle is parked in the garage when summoned via an app or V2X communication. 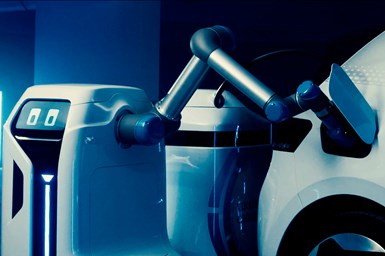 Communicating directly with the vehicle, the robot’s extendable arm can open the on-board charging portal and connect the EV to the charger. After the process is completed, the robot decouples the connector and returns the portable battery to a central quick charging station dock to be replenished itself.

The entire process can be completed without any human intervention, VW boasts.

What’s more, the robot can attend to multiple vehicles—moving from one to another during the charging process, according to the carmaker.

VW says the system will enable garage operators to offer EV charging capabilities throughout a facility at a relatively low cost (no construction or stand-alone chargers are required). 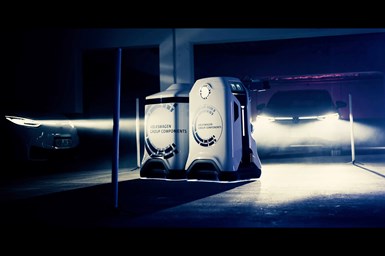 “A ubiquitous charging infrastructure is, and remains, a key factor in the success of electric mobility,” declares Thomas Schmall, CEO of Volkswagen Group Components. “Our charging robot is just one of several approaches, but is undoubtedly one of the most visionary,”

The answer is “yes” for the mobile quick-charging station, which is due to launch early next year.

But the charging robot still is being developed, and VW offered no timeline for commercialization.

Ultimately, the Components business unit will be responsible for all Volkswagen Group charging activities and systems, including an upcoming DC charging family.

The intention, VW says, is to integrate the charging robot into an overall concept to help support the carmaker’s aggressive electrification plans.