What is the difference between live theatre and webinars? Not as much as you may think. Abigail Hull, Digital Product Specialist, writes about how the two overlap. 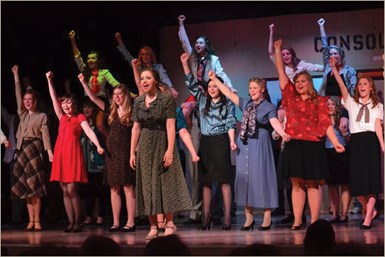 Abby in her high school's production of Nine to Five: The Musical in 2013. (Abby in red dress, front row, second from left.)

Webinars and live theatre aren’t all that different.

A theatre troupe prepares for weeks, months, even years. They build and prepare everything so it looks and sounds amazing, promote the event to fill the seats of the theatre, and on opening night, everything culminates into the seconds just before the curtain goes up.

Questions race through my brain. Did I remember to check all the lights? Will I remember my lines? What happens if I mess up?

Seasoned veterans of the theatre will know that if a mistake happens, you just keep on going. Some choose to acknowledge it and correct the moment, some may ad-lib a joke about it to relieve the tension, but no matter what, as the adage goes, “The show must go on.” Plus, if you keep going through the script, there’s a good chance the audience doesn’t even realize that a line has been flubbed or a stage cue has been missed.

I grew up in the theatre community, particularly in my local community theatre where my family has been involved for many, many years. Since 2000, I’ve only missed one of the annual shows—and only because I was studying abroad! My grandmother was in the show when I was a kid, and I joined the cast at my first opportunity. The tradition in our club before every single show is to ask each other, “Are we gonna give ‘em a show?!” to which we all enthusiastically yell, “YEAH!”

It was a natural decision to be involved in theatre as I grew up, holding various roles: actor, lighting operator, and stage manager.

For those who may be unfamiliar with the term “stage manager,” they are the person responsible for every aspect of the show—before, during, and after.

Before a show, they work with the actors, creative team, technical team, and venue to verify everyone and everything is ready on time.

During a show, their role is to literally “call the show”—every single lighting, music, audio, set, and curtain cue is called by the stage manager. On top of cues, they are also communicating with the crew to verify each cue is even ready to be called.

After a show, they tidy up; reset the stage, props, and costumes; and make sure that everything has been returned to its home for the next show. At the closing of a run, after its final show, they work to put in reports, strike the stage, and archive the final script. 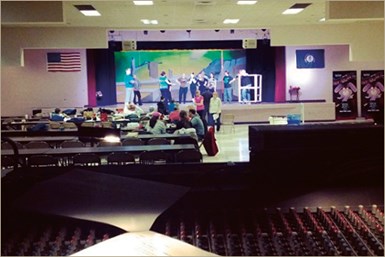 Behind-the-scenes of a Saint Joseph Drama Club rehearsal in 2015.

Each webinar is a one-night-only theatre show, each with its own cues.

While webinars are designed to be digital only, the work behind-the-scenes is the same as a live theatre production.

Before the webinar, we work with you to build out the promotion for the event and then to carry out that promotion. If changes occur, we find the best outcome for each circumstance.

We connect the team online and verify everything is working as planned. We check that your microphone is working, your webcam is running, and that you look like a star.

For the audience, we verify that they know where to find us, that they can see and hear from wherever they may be joining, and make sure they know how to interact with us.

Just before we go live, it may not appear that I’m very active. I’m typically making conversation with the team, my goal being to distract from any potential stage fright before their presentation. But I’m also running the show behind-the-scenes—the chat, Q&A, technical checks, email, internal chat, stats, and more—both before and during the broadcast. Nothing for me changes after I press the button to start the broadcast. 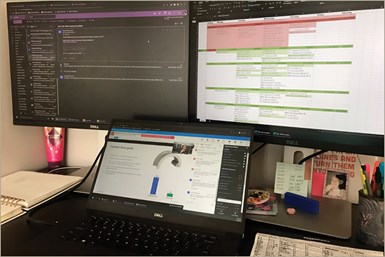 Abby's work-from-home webinar setup. Her three-screen setup has been compared to a NASA launch center.

I daresay I am the stage manager of each webinar I run, as are those who help with the Gardner webinar program.

We collaborate with the entire company of Gardner Business Media, Inc., from editorial to marketing and creative to information services. Every single element in a webinar comes together to broadcast an hour’s worth of content.

Murphy’s Law is always in play, and we must be prepared should it rear its ugly head. We just keep on going. Every single aspect of a webinar can affect the live broadcast and we prepare for every scenario, ready to problem-solve any hiccups we may encounter. We are all inherent problem-solvers.

Unfortunately, live theatre has been on hold since March 2020. There have been ways to fill the silence—in recordings or digital versions or odes to the craft—but there is no substitute to the swell of live music before the curtain goes up and creating a roar of laughter with the hundreds or thousands of other people, experiencing the same joy.

But that little jolt of adrenaline just before I hit that start button? It’s pretty darn close. So let’s give ‘em a show.

Abigail holds a B.A. in media informatics from Northern Kentucky University. She has been a part of her local community theatre since 2013 and cannot wait until live events are back up and rolling—particularly the annual Jimmy Buffett concerts in Cincinnati, Ohio.