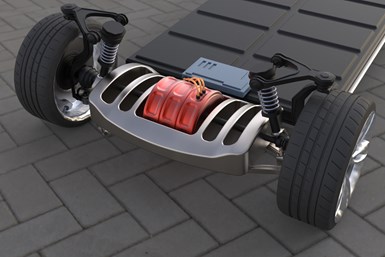 If that’s not enough, the technology also is said to be more reliable, less expensive and easier to produce.

Not surprisingly, the Texas-based startup has big plans for the motors.

The company, which currently is ramping up production for industrial HVAC systems, is working with an unnamed tier-one supplier to adapt and test the technology for automotive applications.

The design eliminates heavy iron laminates and copper windings. In addition to weight savings, this significantly reduces core losses, decreases cogging and torque ripple, according to the developer, while boosting efficiency. In traditional systems, as much as one-third of motor losses are caused by eddy currents in the steel core.

The PCB stator with copper circuits is packaged between rotor discs. As current passes through the coils, an electromagnetic field is created from the rotor magnets to generate torque and rotation.

The IEm Series has a 250-kW (335-hp) power range and can operate at 25,000 rpm. But the technology can be scaled to virtually any power level to meet customer requirements, according to the supplier.

The technology was developed by Infinitum founder and CEO Ben Schuler. He says the company currently holds 13 patents for the system, with another 40 pending.

Adding Up the Benefits

Performance metrics vary by application, based on power, voltage and speed. But in terms of direct comparisons with current electric motors, Schuler says the IEm is about:

In addition, the copper conductors are fully insulated and provide the coil with an equal coefficient of thermal expansion. This makes them less prone to failure, increasing the life of the motor and dramatically improving reliability (by as much as ninefold), according to Schuler, who boasts that the design is “virtually indestructible.”

Other purported benefits include the ability to directly integrate sensors into the PCB stator—to measure vibration and heat at the source—and ease of manufacturing. Noting that circuit boards already are used in other systems throughout a vehicle, Schuler says customers will be able to create design files within minutes and could produce the motors at their own facilities.

“It’s a robust technology that’s also very easy to manufacture and assemble, he notes. “The capex to ramp up production is significantly less than it is for current motors.”

Infinitum aims to begin testing the motors on dynamometers within the next few weeks, which will be followed by road tests early next year.

One of the key changes the company is working on is to switch from passive air cooling to standard automotive oil cooling techniques. The company estimates that this could increase power densities from less 3-5 kW/kg to as much as 12 kW/kg with active cooling.

Formed four years ago, Infinitum has 20 full-time employees and has raised $18 million to date.

Schuler says the company can quickly ramp up production with contract manufacturing partners as needed. The supplier also is open to licensing agreements with customers.

Infinitum expects to produce about 10,000 electric motors next year for industrial HVAC fans, pumps and compressors.

The initial automotive deal is to develop the technology for a hybrid-assist system.

In addition, Schuler says he is in talks with several other suppliers and carmakers about potential applications in EVs. Infinitum also is developing motors for electric planes as well as marine and power sport systems.