Increasing Use of Structural Adhesives in Automotive

Can you glue a car together? Frank Billotto of DuPont Transportation & Industrial discusses the major role structural adhesives can play in vehicle assembly.
#aluminum

The question is a simple one: Can you glue a car together?

And while that might have once seemed to be a rather fanciful idea or something that would be relegated to vehicles built by hand, not mass produced, perhaps the industry is getting rather close.

Or so it seems from a discussion with Frank Billotto, Americas Strategic Market Manager, DuPont Transportation & Industrial, who specializes in adhesives. It is worth noting that this business incorporates what had been the Dow adhesives portfolio.*

Here’s a stat that puts the increased use of structural adhesives in vehicles in perspective. Billotto says that the average amount used on a vehicle in 2014 was 69 m. In 2019 it was up to 90 m. 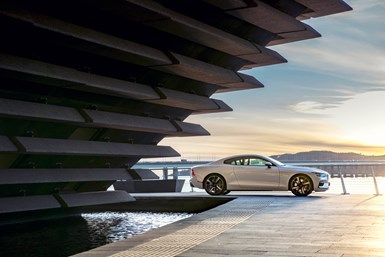 The Polestar 1 makes extensive use of structural adhesives to join composites and steel for weight savings and NVH reduction. (Image: Polestar)

“You can apply adhesive anywhere there is structural joining with a weld or rivet,” he says. Use it on the body-in-white. Use it on closure panels.

And what is notable is that it can be used to join multiple materials: steel, aluminum, magnesium, composites, plastics, glass.

So the question that comes up is whether the adhesive can be used in place of traditional welding. Billotto doesn’t answer “no.”

“It would be very difficult,” he says. “Very challenging.”

And explains that the adhesives need some time to cure, whether it is chemical curing at room temperature or if it needs heating to kick off the curing and bonding. What a weld—or a mechanical fastener, like a rivet—does it provide immediate holding of the parts. Think, for example, of a spot-welding gun, which acts like a clamp as it creates the weld between the two materials. Were there to be just adhesive applied, the parts might slip due to gravity or inertial forces were they to be moved before there was sufficient curing.

Billotto notes, however, that in certain situations the structural adhesive can do the whole job. He points to the BMW i3 composite substructure, which he says is joined with a two-component adhesive with no welds or fasteners. The way this is performed, he explains, is that the adhesive is applied then there is infrared heat staking in strategic areas to help build strength quickly.

One of the things that is somewhat simplified in terms of assembly is when there are mixed materials—such as steel and aluminum—the joining can be performed with an adhesive. While these materials can be welded, it is trickier than when it is steel-to-steel or aluminum-to-aluminum. And while they can be readily fastened, there is the issue of galvanic corrosion that can result at the interface of the materials; the adhesive forms a corrosion barrier.

One vehicle that has a combination of two materials is the Polestar 1, which brings together composites and steel. There is some 50 meters of adhesive used in the bonding of the vehicle body. A couple of other benefits derive from this approach, including making mass reduction more feasible through the use of tailored materials to the application (it is estimated that the adhesives help reduce mass by about 300 kg on the vehicle), as well as helping mitigate NVH.

Another vehicle with extensive adhesive use is the TX5 taxi from the London EV Company, which has a bonded aluminum body structure. Among the components that are adhesively joined are the chassis, brackets, posts, roof and fixed glass. There are also SMC body panels joined.

While the Polestar 1 is a luxury vehicle and the TX5 is a niche product, Billotto says there is a growing application area for structural bonding: liftgates on SUVs and crossovers. These closures are being produced primarily using lightweight plastics, with some steel components and the integrated backlight. He says that in production, there is typically heat staking performed, as in the i3 example, in order to facilitate faster cycle times.

An area where he sees strong potential growth is in electric vehicle battery pack enclosures. Not only can a structural adhesive be used to join the top and bottom of the enclosure, but because there is a serviceability issue, a section can be cut out of the top or bottom surface then adhesively bonded in place with an elastic adhesive such as the one used to bond windshields in place: when you need to have your windshield replaced, the technician cuts through the existing adhesive, makes the replacement of the glass, then applies fresh adhesive. This same sort of approach can be used for the battery pack enclosure.

While an entirely bonded car or truck isn’t likely anytime soon, it is clear that there is an ever-increasing trend toward structural adhesives.