Tritium, one of the largest producers of fast-charging devices for electric vehicles, is introducing a scalable architecture to add charging capacity after a charger has been installed. 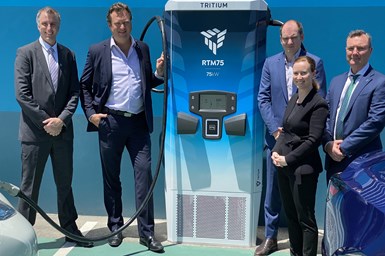 The technology, which is touted as an industry first, allows charging stations to increase an individual unit’s power in 25-kW increments.

Currently, network operators use chargers with fixed power rates, such as 50-, 175- and 350 kW. To add capacity, stations have had to buy new chargers.

Tritium’s Modular Scalable Charging (MSC) platform gives charging stations and other users more flexibility to increase power levels as EV technology advances. The approach also can be a lot cheaper than having to replace existing units with more powerful ones. 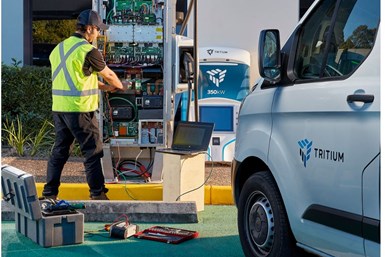 Brisbane, Australia-based Tritium plans to launch the new platform globally in the second quarter of 2021 with the RTM75 DC fast charger.

Customers can start with 25-kW capacities and scale up to 75 kW with additional rectifier modules as needed. The 25-kW rectifiers weigh between 35 lbs (DC-DC modules) and 48 lbs (AC-DC).

At 75 kW, the system can add nearly 50 miles of range to an EV’s battery in 10 minutes of charging, according to the supplier.

The RTM75 will be followed by 150-kW and 350-kW systems later next year. Moving forward, the company plans to launch at least one new product every quarter.

The technology supports CCS and CHAdeMO charging protocols and can accommodate EVs with battery capacities as great as 920 volts.

Founded in 2001, Tritium says it has deployed more than 4,500 charging stations in 38 countries. EV drivers have conducted some 600,000 charging sessions at the stations.

In addition to dominating the Australian market, the company is expanding rapidly in Europe through the Ionity network. Formed in 2017, Ionity is a joint venture owned by Audi, BMW, Daimler, Ford, Hyundai/Kia, Porsche and Volkswagen. The group aims to have a charging station about every 75 miles along major highways.

Earlier this year, Tritium launched its new RT175 unit in California. This summer the company also became the first in the industry to offer “plug-and-charge” capabilities, which automatically bills drivers as they are recharging—eliminating point-of-purchase payments and RFID authentication.