A Ray of Sunshine for EV Charging?

Curiosity Lab, a year-old smart city tech startup in Peachtree Corners, Ga., has installed what it claims is the first surface-powered solar panels in the U.S. to power a charger for electric vehicles. 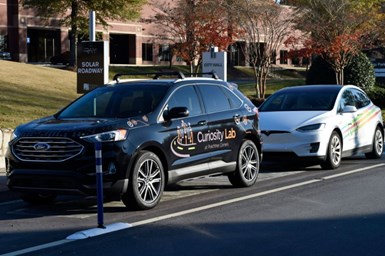 The system was provided to Peachtree Corners through a partnership with The Ray, a nonprofit, living laboratory and proving ground located along an 18-mile stretch of Interstate 85 near the Georgia/Alabama border.

Embedded in an autonomous vehicle test lane, the solar array can produce some 1,300 kWh of electricity per year for a Level 2 EV charger installed at Peachtree Corners’ city hall.

The charger is equipped with an energy storage system for nighttime charging, according to the developers.

During the pilot program, drivers can use the system to recharge their EVs for free.

“While this new form of 100% renewable energy will begin with supplying power to an EV charging station, our vision is to begin to power more existing infrastructure across the city,” says Brandon Branham, Peachtree Corner’s assistant city manager and CTO. He lists potential applications in sidewalks, bike lanes and other off-grid surfaces.

Colas has been testing the technology in Europe, in conjunction with the French National Solar Energy Institute, for several years with mixed results. An ambitious system installed in Normandy in 2016 was panned last year for not living up to expectations. That system was designed to power street lights.

The Peachtree installation is said to be more durable and efficient, resulting in a 21% performance increase over previously deployed panels.