General Motors chairman and CEO Mary Barra just didn’t drive a stake in the ground regarding the company’s electric vehicle plans, she drove in a tent pole:

Thirty new EV launches on a global basis  by 2025. . .more than two-thirds of which will be available in North America. 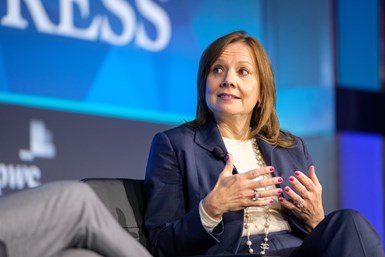 “Climate change is real, and we want to be part of the solution by putting everyone in an electric vehicle,” said GM chairman and CEO Mary Barra. (Images: GM)

At the risk of stating the obvious: This is nearly the end of 2020. This means that the acceleration into the EV space is going to be happening at warp speed.

Barra also said that GM is upping its investment on EVs and automated vehicles from $20-billion to $27-billion by the end of 2025. That’s more than half of GM’s capital spending.

Barra: “Climate change is real, and we want to be part of the solution by putting everyone in an electric vehicle,” said Barra. “We are transitioning to an all-electric portfolio from a position of strength and we’re focused on growth. We can accelerate our EV plans because we are rapidly building a competitive advantage in batteries, software, vehicle integration, manufacturing and customer experience.”

GM personnel at its Chemical and Materials Systems Lab are working on the second-generation Ultium batteries. The objective is to develop batteries that will have twice the energy density and half the cost of existing batteries.

One of the advantages of the battery architecture is that it can handle new chemistry and cell types without having to redesign it, which not only facilitates advances, but allows the utilization in various types of vehicles.

These batteries will be produced at the Ultium Cells LLC, a joint venture with LG Chem, which is building a battery plant in Lordstown, Ohio.

Another way they’re speeding product to market is through the extensive use of virtual development tools.

The 2022 GMC HUMMER EV was developed in 26 months—with 50 months having been the norm.

A proof point of this increased speed is that GM has also announced the Cadillac LYRIQ EV will launch in the first quarter of 2022—nine months ahead of schedule.

Twelve vehicle programs in all have been advanced:

Also in development are two Ultium-based EVs for Buick.