Factory ZERO by the Numbers

Some key digits about a transformed factory in the 313

Although General Motors has renamed its Detroit-Hamtramck Assembly Center “Factory ZERO,” there’s a bigger number involved that shouldn’t be overlooked:

That’s the number of dollars that GM is investing in tooling and upgrades to make the facility capable of building electric vehicles at scale. 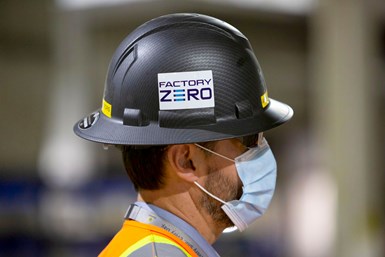 That $2.2-billion is the single largest investment GM has ever made in a plant.

That’s the number of jobs in the plant once it is fully operational.

GM has announced that it has two vehicles scheduled for production at Factory ZERO (though one can readily assume that there will be many more as the OEM fills out its EV lineup):

Both of those vehicles are produced on the GM Ultium battery platform.

That is to reflect GM’s goal of zero-crashes, zero-emissions and zero-congestion.

That’s the percentage of U.S. facilities that will be powered by renewable energy by 2030.

Factory ZERO will be powered by renewables by 2023.

Dane Parker, GM chief sustainability officer, said of the facility: “This manufacturing plant will be the epitome of GM’s vision by sustainably manufacturing electric and shared autonomous vehicles that can help reduce crashes, emissions and congestion.”

And Gerald Johnson, GM executive vice president of Global Manufacturing, described it as “GM’s flagship assembly plant in our journey to an all-electric future.”

(A bit of history. “D-Ham,” as it is referred to around here, was opened in 1985. It’s initial products were the Cadillac Eldorado and Cadillac Seville. And in subsequent years at the 4.1-million square foot facility, there were products built including the Buick Riviera and Oldsmobile Toronado to the Chevy Volt and the Cadillac ELR. The last products before the retooling commenced were the Chevy Impala and the Cadillac CT6. A reason it was called “Detroit-Hamtramck” is because it is located in both municipalities. And here’s a fun fact about Hamtramck: it is completely surrounded by the city of Detroit.)