Walmart Cruises Ahead with Green Autonomy

Providing customers with contactless autonomous delivery, while saving the environment with renewable energy

When you think of automotive innovation, Walmart usually isn’t one of the first companies (or even in the top 5,000) that comes to mind.

But the discount retailer is taking an aggressive approach to drones and autonomous delivery vehicles. Over the last few years, Walmart has tested such services with about a half dozen manufacturers and technology companies, including Ford, Nuro, Waymo, Gatik and Flytrex.

Cruising with a Greener Twist

The latest partnership is with General Motors’ Cruise Automation unit. 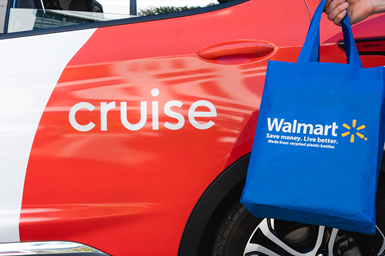 As part of a pilot program due to launch early next year in Scottsdale, Ariz., Walmart customers will be able to specify that select online orders from local outlets are delivered via one of Cruise’s all-electric self-driving cars (modified versions of the Chevrolet Bolt EV).

The deliveries will be contact-free. This means customers won’t have to interact with other people during the process—but they will have to unload their own groceries and packages.

Another plus: The Cruise-Walmart EV autonomous delivery fleet will be charged entirely from renewable energy sources.

Cruise has taken a similar approach with its test cars in San Francisco since late last year, with the electricity for these vehicles derived in part from a dozen solar energy facilities on school sites in southern California.

The program with Cruise supports Walmart’s efforts to achieve zero emissions from its operations by 2040 and to “protect, manage or restore” at least 50 million acres of land and 1 million square miles of ocean by 2030.

“You’ve seen us test self-driving cars in the past, and we’re continuing to learn a lot about how they can shape the future of retail,” says Tom Ward, senior vice president of customer product for Walmart’s U.S. operations.

The partnership with Cruise is especially exciting, he notes, because it serves dual purposes with “technology that has the potential to not only save customers time and money but also is helpful to the planet.”