CTO Guillaume Devauchelle on the future of electrification, automation and in-vehicle health systems

Through the first nine months of 2020, Valeo’s sales outpaced global automotive production—which was off 25% in the wake of the coronavirus—by four percentage points.

Even during the height of the pandemic and widespread shutdowns earlier this year, the future direction was clear, says Valeo CTO Guillaume Devauchelle. Despite the slowdown, he says, the industry transformation is accelerating. 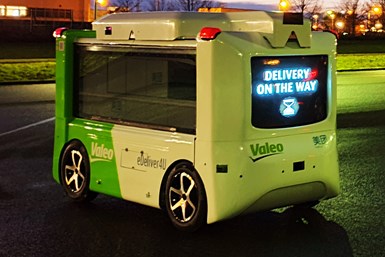 The company is testing prototypes of the vehicle, which has a top speed of 7 mph and a 62-mile range, in China with e-commerce giant Meituan Dianping. There is no driver on board, but the partners can take control remotely if necessary. Devauchelle estimates that the vehicle will operate autonomously 99% of the time.

Valeo expects all new vehicles to be electrified in some way by 2030, at least in Europe, China and Japan. The U.S. is less certain but still trending in the same direction, Devauchelle says. 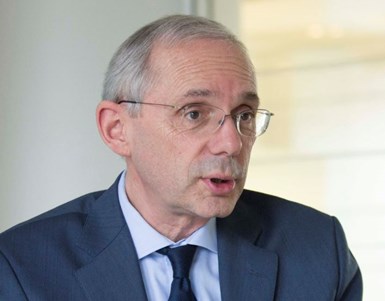 “There’s an ongoing massive industry investment into electrification,” Devauchelle says, noting that the move is being driven by emissions and fuel economy regulations.

Valeo, which began developing electric power systems 20 years ago (about the same time Devauchelle joined the company), can supply systems across all levels of hybridization and full electrification. The key, Devauchelle says, is being able to scale up technologies to accommodate all types and sizes of vehicles.

“We have a platform approach that allows the same technology to be applied to multiple types of vehicles,” he explains. “The more flexible we are, the more successful we will be.”

Valeo envisions about 25% vehicles will be full EVs or plug-in hybrids by 2030. A lot of these likely will be small city cars—including robo-taxis—that typically carry only one person and make short trips.

The sweet spot for 48-volt mild hybrid systems will vary by brand to meet regulations, Devauchelle says. Valeo currently boasts a 40% global market share for the technology. “It’s fascinating that the same system can be applied to a premium sedan in Europe or a 3-wheeler in India.”

The transition to fully autonomous vehicles “isn’t happening as quickly as some anticipated,” Devauchelle acknowledges.

Still there has been amazing progress in recent years, he says, noting that sophisticated ADAS features already are making their way into entry-level vehicles.

But Devauchelle notes that it takes time for volumes to achieve critical mass. As an example, he points out that Valeo launched its ultrasonic sensor technology in the 1990s for parking applications on one vehicle, the BMW 7 Series. Today, the company makes about 1 million of the devices per day.

Valeo now derives more than one-fifth of its business from ADAS sensors alone, including ultrasonic units, cameras and radar.

The company hopes to achieve similar ramp-ups with other technologies, including lidar. Valeo introduced the world’s first production system (with LeddarTech) two years ago in the Audi A8. Last year the supplier announced programs with four other carmakers.

Devauchelle envisions the technology being used in future semi-autonomous Level 3 driving systems as costs continue to come down. But he doesn’t expect lidar to become cost-effective for current Level 2 systems anytime soon.

As vehicles become more autonomous, Devauchelle says, there will be an increased emphasis on the health and wellbeing of occupants.

Such systems will be enabled by a combination of new technologies—including driver monitoring systems—and the increased free time of drivers when they no longer have to focus on the road for the entire trip.

“We want to add value and provide a healthy environment,” Devauchelle says.

To this end, Valeo is developing a new HVAC technology to better focus temperature controls more precisely where they’re needed. This can be achieved by monitoring systems to detect passenger comfort levels, based on breathing patterns and eye movements or whether or what they’re wearing.

If a person has a coat on for example, fans can be directed at an occupant’s nose without having to warm the rest of the passenger cabin to the same level. In addition to enhancing passenger comfort, this also reduces energy consumption. Devauchelle says such systems could become a cost-effective way to boost an EV’s driving range, adding that “it’s a lot less expensive to add a sensor than it is to add battery capacity.”

Devauchelle estimates that such a system could reduce energy consumption by as much as 5%. The technology would require redesigning existing HVAC units, which means it likely won’t be launched in production vehicles for at least five years. 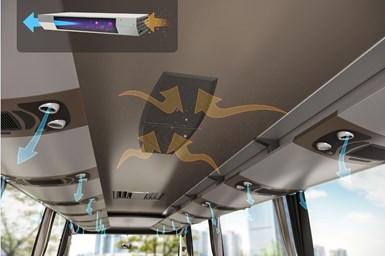 Other technologies already are starting to be deployed. Demand for air filtration systems has increased dramatically in the wake of the coronavirus, Devauchelle says. This is especially true in China, where applications have jumped from 5% of the market to 25% of new vehicles in development, according to Valeo.

The supplier also introduced a “health shield” earlier this year to help sterilize buses against COVID-19 and other viruses. Valeo claims the technology, which is integrated into a vehicle’s air conditioning system, can reduce eliminate 95% of viruses and bacteria circulating in the air via an ultraviolet purification process.

To meet customer demands for new technologies, Valeo is forging a variety of partnerships.

“We can’t do everything internally,” Devauchelle concedes. “Our role is more to turn existing technology into automotive-grade systems, rather than to continuously reinvent the wheel.”

This can be achieved through acquisitions, minority investments, joint ventures, technical agreements and informal partnerships with customers, competitors, suppliers and startups. The key to successful partnerships, Devauchelle says, is to integrate each other’s expertise.

A good example is Valeo’s 2007 acquisition of Connaught Electronics. Valeo has kept the same management team, which allowed the small Irish supplier to grow from about 30 people to an r&d staff of 700 as it transformed into Valeo’s Vision business.

Some traditional carmakers, especially premium brands, want to maintain a lot of control, Devauchelle says. This could require Valeo to write 1 million miles of code and design as many as 50,000 OEM specifications for an automated parking system.

At the other end of the spectrum, Chinese carmakers and other new emobility players want suppliers to take the lead on advanced technologies.

“We have to be able to adapt quickly to meet the different needs and cover a lot of ground from a technology and business standpoint,” Devauchelle says.

This means staying at the forefront of electrification, automation, new mobility and other emerging technologies. Sounds like the perfect job for a chief technology officer.