Solid Power says its next-gen battery could go into production in 2027.

Solid Power, a Colorado-based startup backed by BMW, Ford and Hyundai says it will begin testing its next-generation solid-state cell design for electric cars about 15 months from now.

Assuming all goes well, commercial production isn’t likely to begin until 2027. But there’s much ground to cover by then to prove the technology’s feasibility.

The company has predicted that its high-capacity lithium metal anode design eventually will result in lithium batteries with 50% greater energy density. BMW has agreed to shepherd the technology through the validation process for EV applications.

Solid Power spun out of a battery research program at the University of Colorado-Boulder in 2014. Since then, the company has attracted $26 million in equity financing, including an undisclosed investment by Ford in April 2019.

CEO Doug Campbell tells Bloomberg that production batteries could launch as soon as 2025. But he says that will happen only with the help of “extensive cooperation” from a carmaker.

Like other developers of all-solid-state batteries (ASSBs), Solid State touts the safety and simplicity of its design. ASSBs replace the flammable liquid electrolyte of typical lithium-ion batteries with a stable solid ion-conducting material. 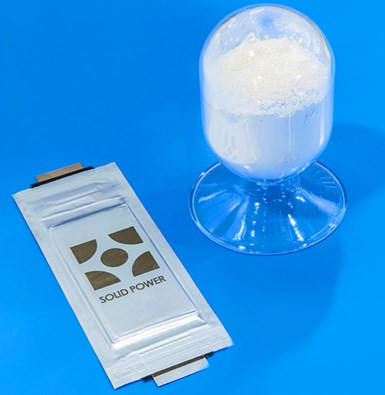 Earlier this week another startup, QuantumScape, claimed it has conquered the performance tradeoffs of solid-state cells. The 10-year-old company, which is heavily backed by Volkswagen, says its cells have nearly twice the energy density of today’s lithium-ion devices, cost less and last longer.

VW has invested more than $300 million in QuantumScape to date. The two companies formed a joint venture in 2018, aiming to introduce the advanced technology by 2025.

Solid State doesn’t intend to open its own battery plant. It says its ASSB cells can be made in the same facilities that currently produce lithium-ion EV batteries.

Campbell says his company is more likely to partner with an established battery maker—or a carmaker that decides to produce its own devices. That assumes Solid State’s promising technology can survive the trip from a laboratory pilot line to EV-ready commercial production plant.