“Driverless technology is no longer a science project; it’s real technology that’s poised to change how the world moves,” declared Motional CEO Karl Iagnemma last month when the company was approved for testing in Nevada.

Now the joint venture, which was formed a year ago by Aptiv and Hyundai, is adding some real-world science substance.

In partnership with Lyft, Motional will offer robo-taxi services in several U.S. cities starting in 2023.

Wait, Don’t They Already Do This?

Sort of. Aptiv and Lyft have been testing a fleet of robot-taxis in Las Vegas since early 2018.

But those vehicles are operated with a backup driver, who can seize control if needed.

The new service will be driven fully autonomously—with no driver in sight—while Motional and Lyft monitor from afar. 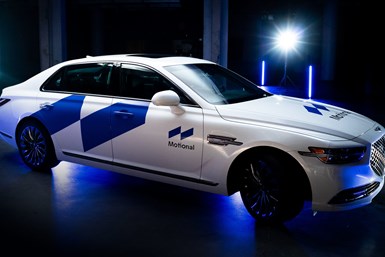 The vehicles will be based on a Hyundai platform, integrated with sensors, computers and software to enable fully driverless operation and remote vehicle assistance. Lyft will power the rideshare network and customer experience.

The program will “significantly” grow the partners’ current AV fleet size, they say, and the service will have the potential to “scale widely.”

Beyond this, the details are sketchy...as in nothing else is known about the vehicles, fleet size, launch cities, operating parameters (routes, geofencing or who will be able to book the cars).

Both partners’ standard reply to such questions is simply: “Service details will be shared ahead of deployment.”

As far as potential sites, it’s a good bet that Vegas will make the cut. Nevada currently is the only state where Motional has permission to operate without a driver on board.

While Waymo has been offering driverless autonomous rides for about a year in Arizona, Motional’s partnership with Lyft promises to provide some much-needed critical mass.

“Our aim is to not only build safe, reliable, and accessible driverless vehicles, but to deliver them at significant scale, Iagnemma says. “We’re partnering with Lyft to do exactly that.”

Moreover, it’s another step in the science project to real world applications transition.