Is This the Future of High-Speed Mass Transit?

Hyperloop travel took another step forward on Sunday with the first tests with people on board.

Virgin Hyperloop tested its version of the high-speed technology, which uses magnetic levitation and linear induction motors to transport pods inside a partial vacuum tube, at its proving grounds near Las Vegas. 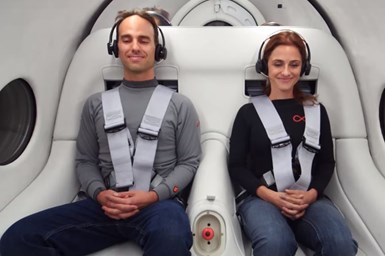 Josh Giegel and Sara Luchian, the company's chief technology officer and director of passenger experience, respectively, traveled about one-third of a mile in six seconds at speeds as high as 107 mph. That’s about one-sixth of the stated top-speed of the system, which promises to move people between New York City and Washington, D.C., in 30 minutes.

VH, which is backed by billionaire Richard Branson, hypes the concept as “on-demand sustainable mass transportation” that will “change the way the world moves.”

Commercialization is a long way off and there are plenty of challenges ahead, including:

Earlier this year, VH said its best-case scenario would be to receive federal certification by 2025 and launch U.S. service in 2030. Several other companies are developing their own hyperloop systems and have conducted tests (without passengers) at sites around the world.

Time will tell whether the technology is viable. But for now, it’s okay to enjoy the ride (it appears that Giegel and Luchian did)—and the hype.