Honda Gets Level 3 OK in Japan

Honda plans to offer Level 3 autonomous driving capability on its Legend luxury sedan in Japan by the end of its current fiscal year (March 31, 2021).

This would make it the first production car in the world with the feature, which allows for hands off the steering wheel and eyes off the road functionality under certain conditions.

Drivers would still have to be ready to take control of the vehicle as needed. But they wouldn’t be required to constantly monitor their surroundings, as is the case with current Level 2 and 2+ systems.

Several other carmakers have flirted with SAE Level 3 operation but ultimately stopped short—due in large part to regulatory constraints and legal ambiguities. This was the case with the 2018 Audi A8, which scaled back to L2 due to the slow-moving approval processes in Europe and the U.S. 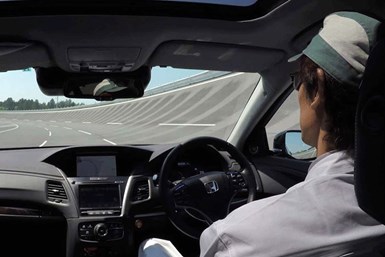 The new MLITT rules require vehicles to issue a warning prior to conditions becoming “unsatisfactory” for autonomous operation.

Under such conditions, drivers are required to immediately resume control of all vehicle operations. If a driver fails to do so or a transfer isn’t possible, the technology will bring the vehicle to a stop at the side of the road.

Other L3 operating requirements include:

In short, MLITT says autonomous equipment “must not cause any concern that compromises the safety of vehicle occupants or other road users under the operable driving environment conditions.” Cars equipped with Level 3 systems also will be required to have a visible sticker that alerts other motorists about the capability.

A handful of other carmakers, including BMW and Mercedes-Benz, plan to launch their own Level 3 systems later next year, pending approval in various markets. Tesla also has begun beta testing its own “full self-driving” system.

But Honda is poised to be the first. This will give it bragging rights if everything goes according to plan.

More importantly, the introduction is another step in the industry’s gradual transition to offering fully autonomous vehicles. Honda will be able to gather valuable performance information with the Legend to help tweak sensors and control algorithms.

But there also are plenty of risks, including accidents and fatalities involving L3 operation.

Such problems are inevitable. Transferring control back and forth between a software system (no matter how advanced) and humans is really difficult, especially when dealing with the unpredictability of other drivers, bicyclists and pedestrians.