A Quick Look at the Hongqi E-HS9

EV SUV for the China market—and beyond

But there are lots of China-built vehicles.

Yes, but the Hongqi E-HS9 is also going to be launched in the European market.

Specifically: Norway, where EVs are snapped up like pickled herring. 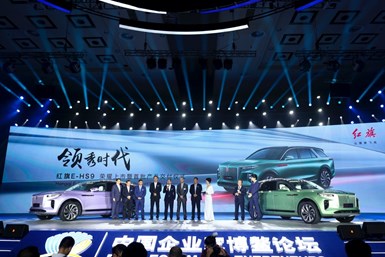 What is known about it?

Not much. 22-inch wheels. A 3,110-mm wheelbase. Six “smart screens” on the interior. A “L3+ autonomous driving system.” OTA capability.

According to Qualcomm Technologies, the E-HS9 is “the world’s first commercialized vehicle to feature LTE-V2X technology.”

It has inductive charging capability. Hongqi says it can be wirelessly charged in 8.4 hours.

While it is putting the E-HS9 in northwestern Europe for now, it has exhibited at CES, so it clearly has an eye on the U.S. market.