The Electric Future Is Here & There’s No Going Back

New lower-cost batteries could mean that we've reached the tipping point for the industry’s shift to BEVs earlier than had been anticipated. 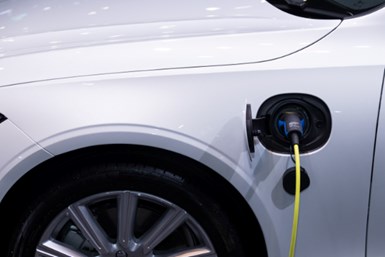 One of the things that have stunted the growth of battery electric vehicles (BEVs) was the battery's cost. With high cost per kilowatt-hour (kWh), it was hard for BEVs to compete against fossil fuel cars' lower cost structure. However, with unexpected technology breakthroughs driving lithium-ion batteries' cost down, BEVs are increasingly becoming a more economical choice over the internal combustion engine (ICE). These new lower-cost batteries could mean that we've reached the tipping point for the industry’s shift to BEVs earlier than had been anticipated and that we will likely see the rapid adoption of battery-operated vehicles.

In September, Tesla made some big announcements at the "Tesla Battery Day," including the unveiling of its new "4680" tabless, high-nickel, dry-cathode, silicon anode cylindrical battery cell. The new "4680" tabless cells will increase the power, range and energy capacity of the batteries they will be packaged into while streamlining production and lowering the overall cost.

Tesla had secretly been developing the "4680" cell under the codename "Roadrunner" for the last four years, intending to transition their "giga-factories," which are producing about 150 GW per year, into "tera-factories." This move will increase Tesla's annual battery output to 1 TW—a 7x increase in battery output per factory.

There are five critical areas of improvement with the new cell that will improve range while reducing investment and manufacturing costs.

The new cell design is vital to accelerating global battery production scaling. These five improvements will collectively boost range by 54%, reduce battery costs by 56%, and reduce investment costs by 69%, making this an industry-changing breakthrough.

General Motors (GM) also has its battery strategy, including a cross-industry partnership with the technology giant LG Chem. The OEM shared their Ultium battery strategy to work with LG Chem to produce low-cobalt batteries at a $2.3 billion factory in Ohio. They plan to reduce the amount of cobalt, the most expensive metal in BEV batteries, from each battery to keep costs below $100 per 400-mile range battery.

Unlike Tesla's cylindrical cells, the Ultium is a pouch design, coming with its own set of advantages and disadvantages. The most significant advantage of the Ultium battery for GM is its versatility. The pouch design offers modularity, making it compatible with a broader range of vehicles, each with different use cases.

For Tesla, a solid BEV technology leader, it made sense to continue developing the cell design that had started the company. It rewarded them with a significant electric vehicle (EV) market share, more than 350,000 cars sold last year, and a target of 500,000+ vehicles in the immediate future.

The new battery chemistry powering Tesla's strategy was jointly developed with China's Contemporary Amperex Technology Ltd (CATL). CATL also plans to supply Tesla in 2021 with an improved long-life nickel-manganese-cobalt (NMC) battery; its cathode comprises 50% nickel and only 20% cobalt. The low-cobalt NMB battery packs will carry a cost of about $100/kWh.

CATL is also at the center of many other battery breakthroughs, including:

The cost-savings technologies driven by CATL and other companies are game-changers and moving us into the future of BEVs.

Beyond the Big Obstacle

The biggest obstacle to electrifying automotive has been the cost of EV batteries. Before transitioning to BEV, the cost to manufacture and own a BEV had to be on par or below that of ICE vehicles, targeting a cost of $100/kWh or below. Many experts forecasted it wouldn't be reached by the year 2030. Now, the cost per kWh has dropped from $350 to as low as $60 kWh in just the past five years. Now that we have blown by the $100/kWh objective, we can expect to see BEV's accelerated adoptions and a forever-changed industry.