Polestar 2: The Start of the Company’s EV Era

Yes, there is a Polestar 1. But it is a hybrid, not an electric vehicle (EV). The Polestar 2 is the company’s first EV—the first of what promises to be many

Polestar as a company has been around since just October 17, 2017. It is owned by both Volvo Car and Geely. This is slightly confusing since Geely owns Volvo, but just consider it as a third company that has the opportunity to draw from both companies while essentially doing its own thing. But it automatically comes with some advantages, as in drawing on the production scale that both of those other companies offer, as well as the underlying architectures that are used by Volvo and Geely, such as the CMA architecture that is being used for the Polestar 2, which we’ll get to momentarily. 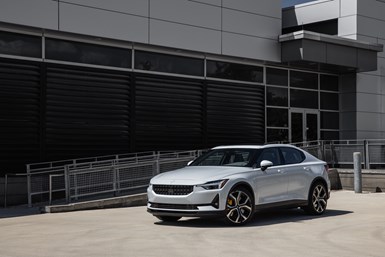 Volvo has familiarity in the U.S. market in a way that Geely doesn’t, so the comparison with that company is most germane to see how the two companies are positioned. While there are some subjective differences (e.g., Volvo is warm and inviting; Polestar is cool and exclusive), the primary difference is that the mission of Polestar is to be the electric vehicle vanguard brand with no internal combustion engines in its future, and while Volvo is going electrified, it isn’t going to be making as significant change under the hood as Polestar. (It should be noted, however, that the first vehicle to carry the badge, the Polestar 1, is a limited production [1,500 over three years, with 150 per year being made available in North America], hybrid that features a 2.0-liter supercharged and turbocharged four and an electric motor that produces 375 hp to drive the front wheels and two 114-hp electric motors on the rear axle to propel the rear wheels; the vehicle provides 619-hp and 738 lb-ft of torque. The carbon-fiber intensive vehicle also has a sticker on the order of $155,000.)

After reading that previous sentence, it should be noted that the launch edition of the 2021 Polestar 2 has a starting MSRP of $59,900, and it qualifies for the $7,500 federal tax incentive, as well as those being offered by states: this is an obtainable five-door fully electric vehicle.

The Polestar 2 has a twin-motor drive system, with identical AC, permanent magnet, Valeo-Siemens motors on the front and rear axles, providing a combined 408 hp and 487 lb-ft of torque. There are front and rear planetary gearsets (8.57:1 reduction) that drive the wheels. The motors are liquid-cooled (sharing the cooling system with the lithium-ion battery and controller). The planetary gearsets are lubricated and cooled with a lubricant that is good for the life of the vehicle; there is no scheduled service for the gearsets.

The motors are powered by a lithium-ion battery that has a 78 kWh nominal capacity and a 75 kWh usable capacity. The Polestar 2 has LED lighting all around. The taillight consists of 288 ultra-bright LEDs. The front lighting is based on Pixel LED lamps, with 84 individual pixels.

The battery, sourced from LG Chem, consists of 324 pouch-type cells that are organized into 27 modules. Individual modules can be repaired and replaced (or the whole battery can be swapped out).

There is a 11-kW onboard charger. With a public fast charger (up to 150 kW charging) it can get an 80% charge in 40 minutes; a full charge can be obtained in approximately one hour.

At the time of this writing, there is no EPA-estimated range. The World Harmonized Light Vehicle Test Procedure (WLTP) cycle has it at 291 miles; Polestar anticipates the EPA rating will be “mid 200-miles.”

Structurally, the unibody is made from five types of steel, including ultra-high-strength boron steel that is used to create a safety cage for the occupants.

The housing for the battery is aluminum, consisting of extrusions that are both bonded and welded. The vehicle is also engineered with an extruded aluminum front lower load path (FLLP) that not only stiffens the body, but also performs crash energy management, directing loads where they can be best structurally accommodated.

The battery consists of two layers. The bottom layer is H-shaped and positioned beneath the front and rear seats and the center tunnel of the body (remember: this architecture is also used for the Volvo XC40, which has a prop shaft that the Polestar 2 doesn’t). This layer goes across the vehicle width and from front to rear in between the wheels. The top layer is T-shaped and goes beneath the front seat and the center tunnel.

The batteries weigh 849 pounds; when fitted into the aluminum container, the total weight is 1,098 pounds. (It is interesting to note that the entire vehicle weighs 4,680 pounds.) The vehicle front to rear weight distribution is 51:49.

As mentioned, the motors as well as the batteries and controllers are liquid cooled. The batteries also are cooled by air gaps between each of the modules, as well as between the battery and the case top and the underbody of the vehicle. In addition, the modules are placed on cooling plates. The objective is to maintain battery operating temperature below 104°F. 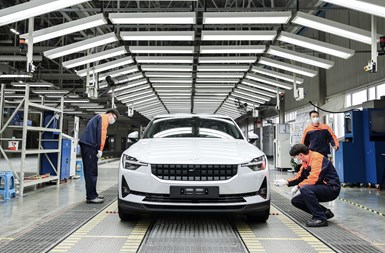 The Polestar 2 is produced at a plant in Luqiao, China, along with other CMA platform vehicles produced by Volvo and Geely.

Not only does the battery case protect the battery in case of a collision, but to help assure battery integrity there is the use of what is known as a “SPOC Block”—the Severe Partial Offset Collision Block. In case of a partial offset impact, it directs the wheel and related components, which are designed to shear off, outward and away from the lower body of the vehicle, thereby protecting the front footwell and the battery case. The FLLP also assists. (Remember: instead of an engine in the front that can help absorb energy in a collision, there is a 1.2-liter container for storage under what would otherwise be considered the hood.)

In addition to the physical safety tech (including the global debut of inner-side airbags, which work to essentially cocoon the driver and front passenger in the case of a side collision), there are various driver assistance functions.

For example, there is “Pilot Assist and Adaptive Cruise Control.” The driver is the pilot and the system provides assistance, not hands-off driving (one hand must be kept on the wheel at all times). At speeds up to 80 mph the system keeps the vehicle centered in the lane with just light steering adjustments—if the road is clearly marked. The adaptive cruise control adjusts speeds through the brakes and throttle as needed. In the event that the driver decides to become a passenger and not providing steering input, there is (1) a visual warning in the information display; (2) an audible warning; (3) if there is no action taken, then there is the activation of Emergency Stop Assist, which slows the vehicle to a complete stop, with the hazard lights blinking for other drivers. The vehicle uses Android Automotive OS, the first deployment of the system in a vehicle.

There is automatic emergency braking that can detect other vehicles, pedestrians and cyclists; lane keeping aid that uses a front-facing camera to determine the vehicle’s position in the lane and can adjust the steering to re-center, and provides haptic feedback through the steering wheel if the driver crosses a lane without activating the turn signal; on-coming lane mitigation, which will steer the vehicle back into its lane if the vehicle detects an oncoming vehicle; run-off-road mitigation, which scans the road ahead and tightens the front safety belts if it determines there is a potential run-off; and driver alert control, which monitors the steering inputs so that if it is determined that the driver’s steering isn’t what it had been there is an audible warning and a visual message to take a break in the information display.

Although the Polestar 2 can go from 0 to 60 mph in 4.45 seconds, there are considerable environmental efforts made, such that one can go fast and not feel particularly poorly about that. For example, they’re using blockchain to assure traceability for the cobalt used in the batteries: only responsibly mined materials are being used.

The interior of the standard model is vegan. Meaning, no animal products are used. (Although there is a Nappa leather option—but this leather doesn’t have chrome additives.)

The upholstery is a material called “WeaveTech,” which is lighter than leather and more durable than vinyl (and it has just 1% phthalates, compared with 45% for vinyl). This material is recyclable. The carpeting material is made from recycled water bottles. The wood trim is recycled black ash.

While an increasing number of cars have Android Auto, which allows the connection of a phone to the vehicle for the use of various Google apps, the Polestar 2 is the world’s first vehicle to have an infotainment system powered by Android Automotive OS. One benefit of that: no phone connection is required. (Yes, Apple CarPlay can be connected to the Polestar 2 via Bluetooth.)

The interface is an 11.15-inch touchscreen located in the center of the IP.

There are over-the-air (OTA) updates for not only the infotainment system, but for the vehicle, as well.

Sure, the Polestar 2 looks a whole lot like, well, a Volvo. This isn’t entirely surprising, given that Thomas Ingenlath, the CEO of Polestar, had previously been the senior vice president of Design at Volvo Cars.

It is an exceedingly young vehicle manufacturer. It needs to find its own identity. 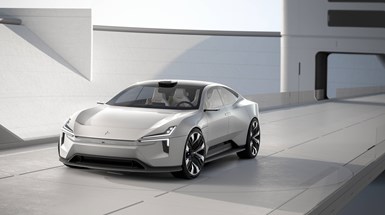 The Polestar Precept. Although a concept, it shows that Polestar has no intention of producing vehicles that might be mistaken for Volvos going forward.

That it will can be discerned from a concept car that would have been introduced at the 2020 Geneva International Motor Show, the Precept, a four-door grand tourer, about which Ingenlath said, “This is not a dream of a distant future.” Low, sleek, sharp, and sustainable (e.g., flax-based composite interior trim panels from a company named Bcomp that are said to be 50% lighter than traditional polymers and with 80% less plastic waste; seat surfaces knitted from recycled PET bottles; carpets from recycled fishing nets).

The Polestar 3, a low-roof five-passenger SUV is coming. And one can only think that the numbers will continue to rise.