Gentex continues to come up with clever ways to use the real estate that is associated with a vehicle’s rearview mirror, including transforming the mirror into a bi-modal device: sometimes it works as a traditional reflective mirror; with the flip of a lever it is transformed into a full-color LCD display that makes use of a custom camera.

One of the things that is happening—and will undoubtedly accelerate, as people forego airline flights—is more road trips. And as there are a multitude of toll roads, this can be problematic, in that physical payments are both inconvenient and unhygienic. 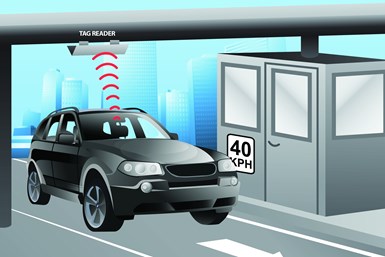 The transponder communicates with the toll system. Housed within the mirror housing, ITM is less obtrusive than the stick-on toll transponders. And now it will work at some gas stations, too. (Images: Gentex)

This is solved for many drivers, in part, by transponders that drivers can obtain from the various tolling agencies—but according to Gentex there are more than 90 tolling agencies, 12 unique interoperable groups, 20 different tolling brands, and five different hardware/software protocols.

Which can result in a windshield having several boxes affixed.

So Gentex developed the Integrated Toll Module (ITM), a multi-protocol toll transponder that is fitted within the rearview mirror housing. This works with the various tolling agencies so there is no need to juggle multiple transponders or accounts.

When the company announced ITM it noted that it has additional vehicle-to-infrastructure (V2X) capabilities.

One has been announced. Gentex and PayByCar, a contactless payment system developer for vehicles, are partnering on using ITM with the PayByCar system to pay for gasoline.

In lieu of using a credit card or cash, the driver needs only an ITM and smartphone to conduct the transaction.

Gentex is going beyond a reflective mirror to one that has LCD image display and V2X capabilities.

When a vehicle with an ITM enters the space of a participating gas station, the PayByCar system texts the driver who responds with the pump number the vehicle is located at.

PayByCar turns on the pump, registers the transaction, charges the driver’s credit card, and emails a receipt.

As PayByCar president and COO Anand Raman puts it, “Clearly, we’re living at a time when contactless payments are becoming increasingly important.”