ZF Delves into the Middle(ware)

ZF has developed a new middleware interface, which it touts as an industry first for a Tier 1 supplier, that will be introduced in production vehicles in 2024. 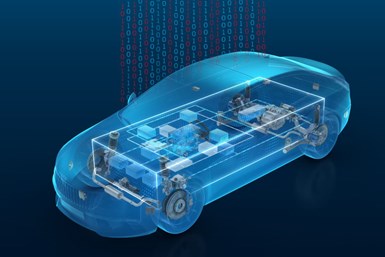 While it may be a familiar concept to computer geeks, middleware isn’t a common term in the auto industry.

As its name suggests, middleware connects traditional software and hardware systems. And ZF expects it to be a key enabler for a host of next-generation technologies—connected, electrified and autonomous—and future “software-defined” cars.

“Middleware translates data from hardware to software in a common language that enables different systems to easily communicate and interact with each other,” explains Nico Hartmann, ZF’s vice president in charge of software systems.

Future vehicles are switching to a more centralized electrical/electronics architecture, driven by a handful of domain controllers connected with intelligent sensors, actuators and middleware.

Serving as the “mediator” between functional applications and hardware abstraction, the latter is the only layer that needs to be connected directly to a vehicle’s operating architecture.

This will minimize interfaces, speed communications and significantly reduce the integration and complexity of the overall system, ZF claims.

All current auto electronic devices use some sort of software interface. But most current systems tend to be fairly rudimentary and/or expensive one-off units, which ZF describes as de facto middleware.

In contrast, ZF’s new middleware provides a standardized interface that can be scaled across vehicle platforms and functional applications. It also is a stand-alone system—developed independently of hardware and software—that can be used with ZF components as well as those produced by OEMs or other suppliers.

The various sensors and actuators in a vehicle typically are supplied by multiple suppliers and have different protocols and interfaces.

For example, Hartmann says, each camera in a vehicle uses different interfaces that all create picture streams. Middleware facilitates this and allows data from each stream to be integrated and shared with different vehicle systems, without requiring in-depth knowledge about each camera, Hartmann notes.

As a result, Class says, engineers can focus on optimizing product-specific functions without having to worry about interfaces.

To better support middleware and the development of other advanced software, ZF is creating a Global Software Center, which will be headed by Hartmann.

The goal, according to the supplier, is to enhance the development process rather than create a new stand-alone group.

The center will be responsible for “developing software systems for future architectures on a group-wide level,” explains Dirk Walliser, senior vice president in charge of r&d, innovation and technology. This will allow the supplier to coordinate and standardize new technologies, tools and processes faster and more efficiently.

The potential savings are huge.

Walliser envisions as much as an 8:1 payoff, meaning what previously required eight developers now could be done by one.

In some cases, Hartmann adds, a standardized approach could reduce development times and costs by a factor of 10.

ZF has middleware development programs with two carmakers. The first applications will involve the next-generation of ProAI, a high-powered processor that ZF developed with Nvidia.

“The software-defined car is our North Star,” Walliser asserts. But it has to be more than a smartphone on wheels, he notes.

“We're focusing on the functions of the future that customers will want and use cases that will differentiate us.”

Middleware is expected to help define and create such vehicles.