The company expects to price the sensor, dubbed Velarray H800, at less than $500. Initial production applications are targeted for as soon as 2022.

Currently, the Audi A8 is the only car that offers lidar. 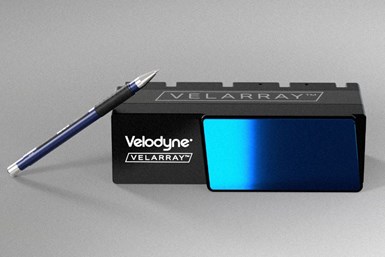 That’s because the technology has been way too pricey, with early prototypes going for as much as $70,000. Costs have come down dramatically in recent years. But at $1,000 or more, lidar isn’t nearly as cost-effective as radar and camera arrays that provide similar capabilities.

Lidar is viewed as a key enabler for Level 4/5 vehicles, which can drive themselves without much or any human interaction. Today’s vehicles top out at L2 and L2+. The A8 was to be the first L3 model, but Audi had to scale back to L2 due to regulatory constraints.

At less than $500, lidar starts to become viable for lower levels of autonomy. The fledgling technology provides complementary benefits to radar and cameras—especially in adverse weather conditions—and the necessary redundancy, as part of a full sensor suite, for safety-critical applications.

The new Velarray unit features a solid-state design (no moving parts) in place of previous puck-style spinning arrays that were mounted on a vehicle’s roof. Velodyne says the device can be integrated into exterior body panels or packaged near the rearview mirror behind the windshield.

Most other lidar suppliers also are developing solid-state systems. Velodyne previously had shied away from the term, preferring to call such systems “directional” sensors.

The compact system is described as a micro-lidar array (MLA) that integrates a laser emitter and receptor with Velodyne’s ASIC technology. An 8-channel MLA is about the size of a penny or postage stamp, according to the supplier.

Performance specifications are listed as:

Velodyne says the lidar has “outstanding detection” of peripheral, near field and overhead objects while addressing corner cases on sloping and curving roads.

The supplier plans to assemble the new lidar at its own factory in San Jose, Calif., and through Fabrinet, one of its contract manufacturing partners.

Velodyne, which also has production agreements with Nikon and Veoneer, says its fully automated process can build the MLA and align the sensors’ optics.