In the six years since it began offering in-vehicle wi-fi, General Motors has accumulated 1 million subscribers for the service in the U.S. and Canada.

GM claims it’s the first carmaker to surpass the threshold. The 4G LTE service is provided by AT&T.

Subscription services promise to be a growing revenue stream for GM and other carmakers, which are competing and partnering with third-party content providers. 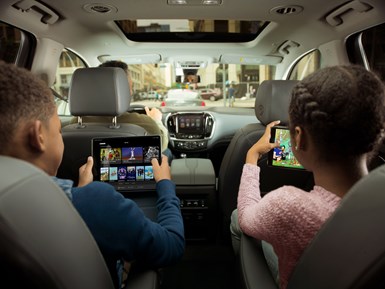 When it introduced wi-fi, GM predicted the service could boost profits by $350 million over several years.

But the math is fuzzy for new vehicles.

Virtually every new Buick, Cadillac, Chevrolet and GMC model sold in the U.S. is equipped to support wi-fi. The first three months (or 3 gigabytes of use) are free.

After the trial period expires, the company charges $25 per month for an unlimited data plan for the service. Several bundling options with other connected services also are available that top out at $45 per month.

GM declined to say what the take-rate is for the service or how many new subscribers have been added this year.

As many as seven devices can be connected simultaneously.

Starting this autumn, all unlimited data plan subscribers can access a new app with limited television and premium cable content similar to in-flight entertainment platforms offered by some airlines. HBO Max, which offers more than 10,000 hours of content from HBO, Warner Bros. and other providers, will be available next year.

GM points out that in-vehicle wi-fi can be extremely helpful in remote areas with limited cell phone coverage or during residential power outages.

The company also offers free access to OnStar Crisis Assist during natural disasters and other emergencies. This can help family members to contact each other or guiding motorists to help. Some 180,000 emergency workers used the system earlier this year during the early days of the coronavirus breakout.

This includes upgrading to 5G technology. But the carmaker hasn’t said when it will launch the high-speed system.