When it comes to weight and efficiency, carmakers are looking for improvements anywhere and everywhere. This pushes suppliers to continually develop new materials, designs and manufacturing processes—regardless of a component’s size or function. 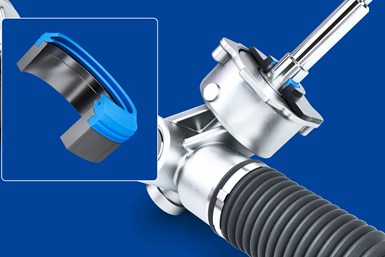 To this end, Freudenberg’s Sealing Technologies unit says it has developed a rotating bearing with an integrated seal in a single unit that provides weight, friction and other performance benefits over traditional bearings with separate seals.

Cost savings are described as “significant,” but vary by application.

Freudenberg has been testing the design, dubbed SWIB (seal with integrated bearing) for two years in a sensor housing of an electric power steering system. The results show:

The sensor records data such as steering angle, which Freudenberg notes is critical to stability control and driver assistance systems. Bearings used in the assembly must be able to withstand loads as high as 3,000 Newtons of radial force, while the seals protect the sensor from dust, splash water and other substances.

An unspecified patented plastic is used in the bearing. The material is said to meet all automotive requirements for temperature, mechanical stress and water resistance.

In addition to vehicles, the company is evaluating potential industrial applications for SWIB.