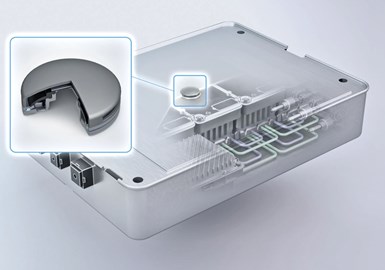 Dubbed DIAvent, the integrated valve helps release excess pressure during normal operations and provides emergency venting in the event of an accident or severe damage.

The system is cheaper and easier to install than current dual-valve pressure equalization systems, according to the supplier.

A water-repellent fabric on the outside layer of the valve allows air exchange rates of 8 liters per minute with minimal pressure differences and protects against 100 mm of water. If the water pressure rises above this, a second inner layer of nonwovens is activated so that no water can enter the housing.

In Case of an Emergency

If the pressure in the housing exceeds the atmospheric air pressure by more than 50 millibars, emergency degassing is initiated. At this level, an umbrella valve opens and can discharge gas at 40 liters per second.

At the end of the process, the valve automatically closes to make it easier to remove a damaged battery, FST says.

The automated open and closing capability also supports pressure equalization in normal operation, such as when batteries with high energy density are exposed to rapid temperature fluctuations.

Only a few liters of air per minute are exchanged in both directions during normal operation. But in an emergency, the entire quantity of gas emitted from a defective cell must be removed in a few seconds. Otherwise, FST says, the internal pressure could cause the housing to burst.

FST introduced the technology earlier this year in Volkswagen’s e-Caddy and e-Transporter electric cargo vans sold in Europe and Mexico. 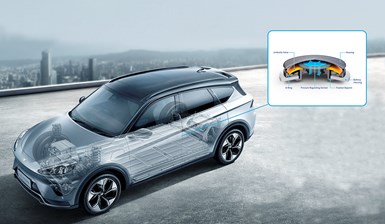 The supplier says it also has development programs with several other customers and expects to announce additional contracts year-end.

FST expects demand for the integrated system will increase as higher energy density batteries are introduced. Such batteries increase the amount of gas that has to be quickly removed in case of an emergency, as well as the amount of air exchanged during normal operations.