Automotive Cybersecurity by the Numbers 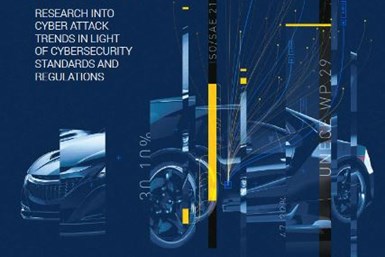 Cyber attacks are increasing throughout the auto industry—at factories, dealerships, fleets, customer databases and in vehicles themselves.

And the problem likely will get worse in the coming years as hackers become more savvy and the number of potential entry points rockets.

Here are some top-line numbers from the report, which crunched information from the media, company databases and other public sources.

55% of the attacks this year were carried out by “black-hat” hackers with malicious or criminal intent.

36% of this year’s automotive incidents involved data and privacy breaches versus 28% for thefts/break-ins.

300-plus vulnerabilities found in 40 ECUs developed by 10 Tier-1 companies and OEMs.

78% of attacks this year were initiated remotely.

1,500 reported software vulnerabilities identified from Uber’s “bug-bounty” program, including a 13% increase this year.

4,118 vehicles were stolen in India (reported as a single event) with cheap electronic devices that enabled the thieves to unlock the vehicle, start the engine and access the vehicles' computer.

3.5 million Zoomcar users had their rental car information hacked and offered for sale on the dark web.

“We see a lot of progress has been made, especially in the last year, both by OEMs and suppliers, primarily due to the latest progress in the automotive cybersecurity standards and regulations,” attests Fay Goldstein, Upstream’s communications manager.

“Because of the complexities within the connected car ecosystem, and the rapid change of attack methods, there is no way for a connected vehicle to be 100% cyber secure,” Goldstein cautions. “This is a continuous cycle, a cat-and-mouse chase if you will.”