It is the ever-vexing challenge: Making something popular better—with what it takes to get new customers without alienating the existing ones.

Nissan has been making SUVs for the U.S. market for more than 30 years, starting with the Pathfinder in 1987. That vehicle was on its own for more than 10 years, because even though a second generation of the Pathfinder appeared in 1996, it wasn’t until 1999 that there was another Nissan ute on offer, the Xterra. Then in fairly short order there were the Murano in 2002 and the Armada in 2004. What is arguably the most significant addition to the Nissan utility lineup occurred in 2007, with the Rogue. It was followed in 2010 by the Juke. The Kicks appeared in 2018. (It should be noted during this stroll down Utility Lane that the last Xterra was sold in the U.S. in the fall of 2015 and model year 2017 was the last one for the Juke, although it continues its quirkiness in other global markets.) 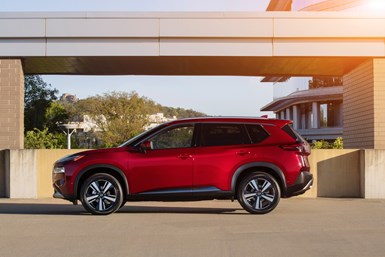 The 2021 Rogue. Designed and engineered to be better. (Images: Nissan)

But it is the Rogue that is of interest here. The vehicle, which is produced at the Nissan complex in Smyrna, Tennessee (along with the Pathfinder), has been a stalwart in the company’s lineup. In 2019 there were 350,447 Rogues delivered in the U.S., which put it solidly at the top of the list for the company, as second place was achieved by the Altima, at 209,183 vehicles. Yes, it is that important. The Rogue is produced at the company’s complex in Smyrna, Tennessee, with advanced tech, like this cobot.

It competes in the lower midsize crossover segment, which puts it up against other massively successful models, including the Toyota RAV4, the Honda CR-V and the Ford Escape, so when 2021 Rogue was being developed, the engineers and designers knew they had their work cut out for them.

So they determined what consumers in the segment wanted—and then worked to over deliver.

There are 10 airbags, including knee airbags for both front positions and side bags for front and rear sides. The rear seatbelts feature pretensioners and a load limiter, said to be first-in-segment.

Another factor contributing to the safety of the 2021 Rogue is an increased use of ultra-high-strength steel in the body-in-white: 35% of the structure compared with 19% in the previous generation Rogue.

(While on the subject of materials, the third-generation Rogue features aluminum doors, fenders and hood. The liftgate and the fuel door are a polymer.) 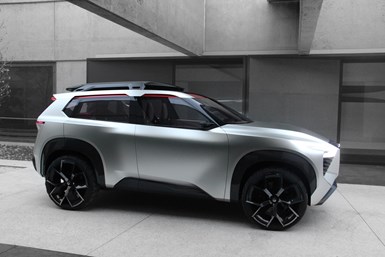 The Nissan Xmotion concept, the design inspiration for the 2021 Rogue.

At the North American International Auto Show in Detroit in 2018 Nissan showed a concept crossover, the Xmotion (although the first letter is pronounced in “Xterra,” the way the Xmotion is pronounced is “cross motion). When introducing the vehicle, Alfonso Albaisa, senior vice president of global design at Nissan Motor Co., Ltd., said "The Xmotion concept's exterior is very dynamic, very wedged. The strong fenders are fluid and emotional, yet somehow very graceful. That's a difference between this design and conventional SUVs with Western influence. The Xmotion concept embodies quiet dynamism and a purity that gives it a very unique presence." While the Rogue isn’t the Xmotion, its design is said to have been inspired by it. (The exterior design was done at the Nissan studio in San Diego; the interior in Japan). It has a certain sophisticated ruggedness to it. Yet it carries some of the design cues that have been showing up on Nissan vehicles of late, like the availability of the “floating roof” (the roof has a different color than the body; the A-, B- and C-pillars are blacked out with only the body-color D-pillar seemingly supporting the roof); the U-shaped body side (there is something of a U-shape created that flows from the top of the front fender, down across the front door and kicking up at the door handle on the rear door); the double V-motion grille that the designers have been adapting to sedans as well as utes; and LED tail lamps.

A term used by Eric Vaughen, manager, Product Planning, for the Rogue is “family hub.” But what seems more to the point is that this is a vehicle that is meant to accommodate people with comfort and to provide storage for their stuff.

Particular attention is paid to the comfort of those in the second row, who usually get short shrift. The headroom for those passengers is 39.2 inches (without moonroof), which is up from 39.5 in the last-generation model; the legroom is 38.5 inches, up from 37.9 inches; the hip room is 53.4 inches, up from 52.1 inches; and the shoulder room is the same, at 55.9 inches.

The front passengers lose some space, particularly in the legroom, which has been decreased from 43 inches to 41.5 inches.

The seats are the now-expected Nissan Zero Gravity units in the front and back; the back seats recline. There are four trim levels for the ’21 Rogue, with the base S, then the SV (which is expected to be the volume vehicle), SL and new Platinum grade. When getting the SL trim, leather seating is standard. At Platinum, there is quilted semi-aniline leather, which is the sort of material that is ordinarily found in vehicles that have a higher price point than the $35,430 MSRP for the Rouge Platinum FWD (the AWD version is stickered at $36,830.) There is an upscale look and feel to the interior.

Getting into the vehicle is facilitated for the rear passengers as the doors open nearly 90°. This design is said to be beneficial for those who are putting child seats in place; child seats can be positioned in any of the three seating spaces.

As for accommodating stuff, there is a variety of spots for things. There is the expected center console with an unexpected butterfly-style opening. As the vehicle has an electronic shifter, there is space where the mechanisms otherwise might be. In the back there is a reconfigured cargo area. There is an available “Divide-n-Hide” cargo organizer that allows tiered storage. Behind the right wheel arch on the inside there is a space that is designed to hold things like milk jugs. Where to put the milk.

Convenience, in large part, goes to the point of technology that makes things simpler and safer to do. On the entry level Rogue there is the Safety Shield 360 system that includes high-beam assist, lane departure warning, rear cross traffic alert, rear automatic braking, blind spot warning and automatic emergency braking with pedestrian protection. The nine-inch touch screen display. It is one of three digital interfaces in the Rogue.

One of the interesting technologies to facilitate driving is the ProPILOT Assist system, Nissan’s hands-on, driver-assist tech that combines the vehicle’s intelligent cruise control and steering assist function. This is not hands-free, but supplemental for reducing steering input while driving on highways and in heavy traffic. For the Rogue, there’s ProPILOT Assist with Navi-Link.

Nissan has improved the radar and camera tech used for the ProPILOT system and for the Rogue there is an integration with the navigation map data. The new radar allows longer range detection to provide smoother braking; the camera does a better job of seeing lane markings to improve the steering assistance.

With the Navi-Link addition, when operating on a limited-access freeway, the system combines information from the navigation map with GPS so that when there are curves or exit ramps, the system decelerates as required and the lane centering performs such that there is a decreased need for system disengagement.

Another new function is that in a freeway traffic jam situation the Navi-Link addition means that the system doesn’t disengage until up to 30 seconds, as the ProPILOT without it disengages after three seconds.

The 2021 Rogue has an all-new platform and chassis. The previously mentioned use of ultra-high-strength steel not only contributes to safety, but also noise vibration and handling (NVH). There is a new multilink rear suspension setup with increased suspension isolation, which also helps with NVH.

Noise is something really addressed by the team. They’ve provided a thicker dash insulator and deployed front acoustic glass. Wind noise is also addressed through the addition of tire deflectors, an active grille shutter and underbody covers; air curtains are designed into the front fascia and the shapes of the A-pillars, rear end and spoiler are focused on improving air flow. 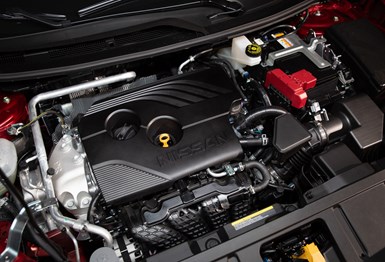 The Rouge comes with a 181-hp four that is mated to a continuously variable transmission (CVT).

The vehicle is powered by a 181 hp, 181 lb-ft of torque 2.5-liter in-line four that is mated to a continuously variable transmission.

There is a new rack electric power steering system that provides a quicker gear ratio than the last generation Rogue and facilitates the operation of the ProPILOT Assist system.