Compact cars may not sell like they used to, but the Sentra is one that would probably surprise those who don’t think about how well a compact sedan can be done

Remember compact cars that didn’t come from Toyota, Honda, Nissan, Hyundai or Kia? Some of those were, perhaps, too prematurely eliminated (e.g., Dodge Dart). Some of those were past their sell-by date when they were pulled out of production (Chevy Cruze sedan—the hatch had life, but not sufficient sales).

But while FCA, Ford and GM have decided that their futures take the form of something that is a ute of any conceivable size, the aforementioned companies that have decided to remain in the category have gotten good.

And with the new, eighth-generation Sentra, Nissan has gotten really good. This isn’t just good on one aspect or another, a feature here and a feature there. 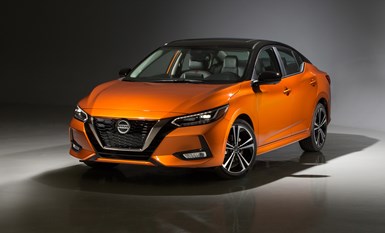 The ‘20 Sentra is all-around good, impressively so.

Know that in the Nissan sedan lineup there are, from top to bottom, the Maxima, the Altima, the Sentra and the Versa. For its cars Nissan has been working on making them low and wide, an execution that is well done for the Sentra, and I must admit that when I first saw the car parked I thought it had to be the Altima.

It is notable how the sheet metal is formed with distinct lines on the front quarter moving into the front door and on the rear moving from about halfway in the rear door going across the quarter panel and wrapping around the back just above the tail lamps. Then there is a tucked-in form above the sill on the side. Nissan has been using what it calls the “V-motion” grille for the past several years, which is on the Sentra, but flanked by some sharp creases, particularly in surrounding the fog lamps. Through the use of a black stripe running from the back of the rear door glass to the top of the decklid there is supposed to be a “floating roof” appearance, which is probably the least effective design aspect of the vehicle—after all, the A-pillars pretty much keep the roof from floating.

The version as driven here has the “SV Premium Package.” Which is a $2,460 option. And which has an effect on the interior execution, as it brings quilted leader seats, six-way adjustability for the driver’s seat (and two lumbar adjustments), heat for the front seats, a leather shift knob and a power sliding moonroof with a tilt feature. (For the outside it adds LED headlights and daytime running lights, as well as 17-inch alloys.) 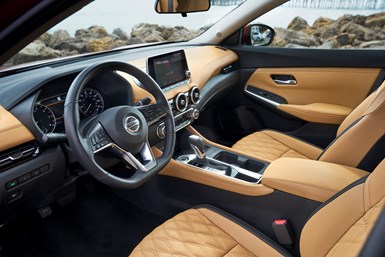 The Sentra is powered by a 149-hp four-cylinder that is mated to a continuously variable transmission, the Nissan Xtronic CVT. Nissan has been providing CVTs for a number of years and with the setup on the Sentra it has gotten it right.

The reason for a CVT is that because by using a belt and pulleys rather than gears as in a traditional automatic, the vehicle is kept at an optimal rpm. This helps improve fuel efficiency. (The EPA mpg numbers for the car are 29 city, 39 highway and 33 combined.)

Due to the nature of the way the belt moves on the pulleys, there are no shift points, so there is said to be smoother acceleration.

But often with CVTs, the acceleration seems interminable. You get the sense that you’d rather not save the gas if it means that there is such a molasses-like sensation.

Nissan has nailed the CVT with the Sentra because there is an atypical peppiness. (I actually had to read the window sticker to make sure that it had a CVT.)

According to Kelley Blue Book, the average transaction price for a Compact Car in August 2020 was $21,594. 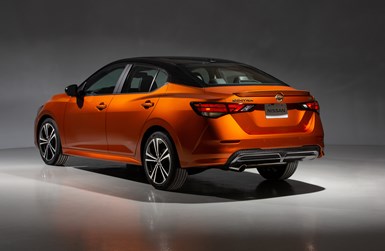 This model is about two inches lower and two inches wider than its predecessor, giving it a solid stance.

The MSRP for the Sentra 2.0 SV is $20,270. The vehicle as driven (in addition to the Premium Package it has a Lighting Package, an Electronics Package and carpeted mats for the floor and trunk) has a sticker, including the $925 destination charge, of $24,800.