Uber, which has been shopping its automated vehicle technology business for several months, has landed a buyer: Aurora Innovation.

The 3-year-old San Francisco-based startup, which specializes in self-driving truck systems, has agreed to buy the ride-hailing giant’s Advanced Technology Group in a stock transaction that values the combined operations at an estimated $10 billion.

As part of the deal, Uber will get a 26% stake in Aurora and Uber CEO Dara Khosrowshahi will join the tech firm’s board of directors. Uber also will invest $400 million in Aurora.

In addition to the cash infusion, Aurora will gain about 1,200 engineers and software developers, as well as access to ATG’s technology. 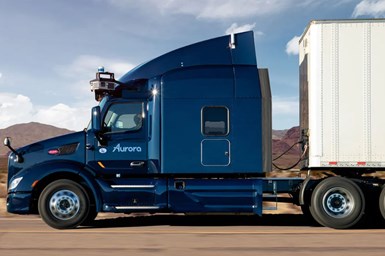 The deal also opens the door for using Aurora’s platform in future Uber robo-taxis and could provide access to other ATG investors. Toyota and Denso invested a combined $667 million in ATG last year.

"With the addition of ATG, Aurora will have an incredibly strong team and technology, a clear path to several markets and the resources to deliver," says CEO Chris Urmson. "ATG will strengthen and accelerate the first Aurora Driver applications for heavy-duty trucks while allowing us to continue and accelerate our work on light-vehicle products.”

The sale, which marks the end of Uber’s ambitious plans of developing its own robo-taxi fleet, will allow the company to focus on its core ride-hailing business.

ATG was poised to be a leader in self-driving vehicles. But a string of setbacks, including losing a lawsuit to Waymo and the high-profile 2018 death of a pedestrian struck by an Uber test car operating in autonomous mode, has left the company reeling.

At the same time, Uber continues to bleed cash, most recently with a $1.1 billion net loss in the third quarter. To help shore up its bottom line, the company sold its Jump bike-share business earlier this year and is scaling back efforts into flying cars, freight hauling and artificial intelligence.

Uber still is targeting robo-taxi applications. But with the ATG sale, the company no longer will have to oversee the development of the technology or be saddled with the expense.

“Few technologies hold as much promise to improve people’s lives with safe, accessible, and environmentally friendly transportation as self-driving vehicles,” Uber’s Khosrowshahi notes. Joining forces with Aurora positions ATG to deliver on that promise faster, he says, adding that he’s looking forward to “bringing the Aurora Driver to the Uber network in the years ahead.”

Aurora’s initial focus will continue to be on heavy-duty trucks.

Aurora adds that the initial costs of the emerging technology can be more easily absorbed in trucks than more price-sensitive passenger vehicles. A truck fleet also is easier to monitor and service.

Co-founded by Urmson and fellow autonomous vehicle pioneers Sterling Anderson and Drew Bagnell, Aurora is testing its technology on public roads in California, Pennsylvania and Texas. In addition to commercial trucks, the company operates a test fleet of autonomous driving Chrysler Pacifica minivans.

The company has development programs with several carmakers and retailers, including Fiat Chrysler and Amazon.