While the Fisker Ocean isn’t expected to launch until the end of 2022, the legendary designer talks about how his company is preparing to create compelling electric vehicles

Henrik Fisker has designed some of the most impressive vehicles of our time.

Like the BMW Z8. The Aston-Martin DB9. And some would say that from a styling perspective, rather than a market success perspective, the Fisker Karma, which came out of the company that he’d established in 2007, Fisker Automotive. Despite the fact that the company offering the extended-range electric vehicle (a.k.a., “plug-in hybrid”) didn’t work out so well (it didn’t help that the company providing the batteries for the vehicle, A123, declared bankruptcy at the time), Henrik was undaunted.

In 2016 he established Fisker Inc. 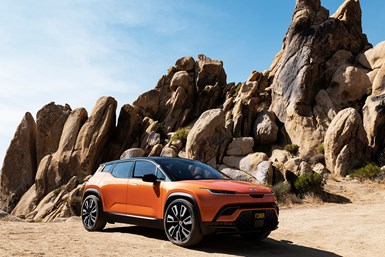 The Fisker Ocean to launch in 2022. Designed in California. To be built by Magna in Europe. (Images: Fisker)

And in late October 2020 the company did a SPAC with Spartan Energy Acquisition Corp., which allowed the company to raise approximately $1-billion, or the amount that Henrik Fisker says on this edition of “Autoline After Hours” is “enough to get our first vehicle”—the Fisker Ocean SUV—“to market.”

The Ocean is a full battery electric vehicle (BEV). The production launch is planned for Q4 2022.

Henrik Fisker, who is not only the CEO of Fisker Inc. but the chief designer, admits, “I’ve never done an affordable car in my life,” meaning that he’s not designed vehicles that are in the mainstream of what average transaction costs are today, which is where the Ocean is at.

One of the things he thinks is inhibiting the growth of EVs in the market is that there is a tendency for them to be (1) too expensive for the average buyer or (2) not particularly. . .compelling.

So one of the objectives of Fisker Inc. is to change that by bringing to market vehicles that are attainable and appealing.

As he explains to “Autoline’s” John McElroy, freelancer Chase Drum and me, one of the challenges that start-up EV companies like Fisker Inc. faces is achieve volume, which can provide the opportunity to achieve cost reductions through scale. 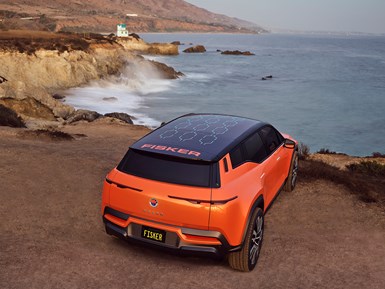 Note the full-length solar roof: part of Fisker’s efforts toward a more-sustainable vehicle.

And another thing that he thinks is essential is for a startup to understand what it is good at: he suggests, for example, that it really doesn’t make much sense to “try to show the world we can manufacture a car better than Toyota” or to think about stamping operations.

Certainly, manufacturing is something that is important to any company, traditional or startup. What Fisker is doing is working with Magna, which will manufacture the Ocean—as well as three other vehicles that the company intends to have by the end 2025—and has been working with the Fisker engineers on the Magna-developed platform that underpins the vehicle.

It is Magna’s manufacturing expertise and resources that will produce the Ocean (as well as provide scale, as the platform is being used by another OEM, as well: “You’re going to see a lot more car companies partner up as we move forward,” Fisker says).

He also notes that a model that has influenced him is Apple and Foxconn, in terms of design and manufacturing.

Among the areas that they are focusing on are (1) consumer-facing technologies and processes, whether this is an app, a flexible leasing program or a pickup-and-delivery service model; (2) the UX model for the 16-inch center touch screen and other displays; (3) software the controls the vehicle.

Fisker talks about a variety of other topics in his hour-plus-long show, including why he thinks sustainability is essential for the auto industry, how there are different expectations among younger people about accessing transportation, the likelihood that there will be a notable shift of the size, approaches and fortunes of traditional OEMs, and a whole lot more which you can see here on “Autoline After Hours.”