Akella on the Intersection of AI & Manual Assembly Ops

While there is an on-going pursuit of automation, Prasad Akella and his colleagues at Drishti Technologies believe there are big benefits to be gained by improving manual operations by using the power of AI
#robotics

“The belief has been the only way to increase productivity is to automate,” he says.

Perhaps more than a small amount of change was predicated on the fact that he worked at General Motors from 1994 to 2000 on a team that was fundamentally responsible for the development of the collaborative robot, or “cobot,” the automation device that can work with human workers, supplementing or enhancing their capabilities. Automation, but automation that is used with, not instead of, human workers. 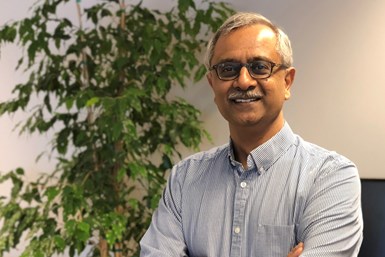 Prasad Akella says he spent a good part of his career working to automate assembly operations to improve productivity, but now he understands that there are huge benefits that can be achieve in manufacturing by better understanding how operators do their jobs. (Images: Drishti)

Prasad Akella says he spent a good part of his career working to automate assembly operations to improve productivity, but now he understands that there are huge benefits that can be achieve in manufacturing by better understanding how operators do their jobs. (Images: Drishti)

Akella, who’d gone to GM after obtaining a Ph.D. in robotics from Stanford, decided to leave Warren and go back to the Valley, where he founded Spoke Software, a firm that is predicated on leveraging the power of networks and datasets.

This led to a number of other positions at various firms (e.g., SAP, Thomson Reuters, SRI International). Again, a focus on networks and datasets.

Which got him to thinking about his experience in manufacturing: how could those elements be used to provide productivity gains?

In 2016 Akella founded and became CEO of Drishti Technologies, a firm that has developed technology that leverages the capabilities of assembly line workers with data—more specifically, leverages what they do with artificial intelligence.

Although the company calls what it has developed “AI-powered video analytics technology,” Akella is more to the point by describing it as “the Toyota Production System plus AI.”

It is about productivity, quality and training. It is about getting actual data from the actual workstations—the gemba, in TPS-speak—that can then be used to adjust the operations to achieve improvements (e.g., in one application they were able to reduce defect rates by 50%.)

One point that should be made up front: “Manufacturing companies don’t have data scientists,” Akella says, so they’ve made the system’s user interface sufficiently simple for people from line supervisors to industrial engineers to use.

In fact, the Drishti system automatically generates Yamazumi charts (vertical bar charts that indicate the elements of the operations performed in a station) so the user can see what’s going on in a straightforward manner.

By having this information, adjustments can be made, thereby achieving the aforementioned operational improvements in the operation.

The system provides information that allow adjustments to be made to manual production operations. (“We’re not focused on machines, but on manual assembly lines,” he says, pointing out that that represents a preponderance of manufacturing operations, citing a stat that has it that 72% of factory tasks are still manually performed.) 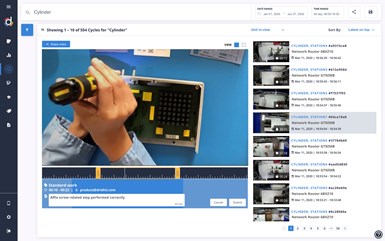 Here the operator being performed is tagged in the white box (lower left) as being done correctly. This can serve as a video instruction to aid the operator.

Here the operator being performed is tagged in the white box (lower left) as being done correctly. This can serve as a video instruction to aid the operator.

It is meant to allow users to answer these questions:

There are two elements of the system, Drishti Trace, which provides the video stream (live and recorded) of the operations on the line, and Drishti Flow, which is the AI aspect that provides analysis.

Whereas traditional time and motion studies have people with clipboards and video cameras monitoring a station before moving on to the next, in the Drishti setup there are cameras at every workstation. As for the cameras, Akella says, “They can be bought on Amazon. The neural network is the secret sauce.”

He explains, “What is different about our system is that we extract information from the video,” going on to say that whereas typical computer vision companies look at a single frame and perform analysis on it, the Drishti system assess the entire operation as it is performed time after time. He says that in one situation, they watched 46,052 cycles in a single month. 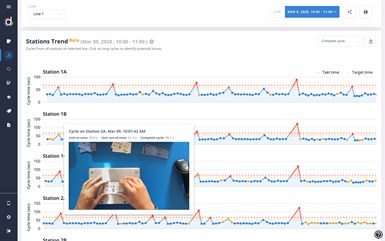 In this trending chart, it is possible to click on one of the cycles to bring up an image of what happened at that moment. Note that even though artificial intelligence is involved, it is an easy-to-use and understand user interface.

And speaking of time, he notes that the obtained information is searchable by date and time, which means that there is a record should it be necessary for health, safety or quality issues.

What’s more, the video can be annotated so that it can be used for training purposes.

Although it is fairly obvious how the system can be beneficial to improve existing operations by providing data and analysis of what is actually happening, a way to improve the takt time, there is an additional benefit.

Akella points out that when it comes to battery electric vehicles, what the actual market will be is still something of an unknown. “There is an investment question, and nobody knows that the demand will be, what the mix and volume will be.

“So how much investment should be made in hard automation?”

His assessment: “The smart answer is no investment. Put in a manual production line, and then use tools to improve the operations.”

Akella cites the therbligs, the 18 elemental motions that are performed in the workplace, codified in the early 20th century by Frank and Lillian Gilbreth, industrial psychologists. (Unlike F.W. Taylor, their contemporary, who was primarily interested in time studies, the Gilbreths focused on motion: improved motion can result in not only better products but better ergonomic conditions for the people performing those motions.)

Akella says that Drishti has accumulated more than 430,000 hours of video and data, which he says is the “largest assembly dataset in the world.”

There are a lot of therbligs that can be improved in there, no doubt.

Operational improvement is predicated on knowing how operations are being performed. Which is precisely what Akella is focused on.